­Nobian, a leader in essential chemicals, and Vulcan, an Australian mining company developing its world-first Zero Carbon Lithium™ and renewable energy project, have signed an agreement to assess the feasibility of producing lithium hydroxide from lithium chloride in Germany. This is a key ingredient for the fast-growing European battery and Electric Vehicles (EV) market.

Through this first of its kind partnership, Nobian will employ its long-standing expertise in electrolysis and chloride production to generate lithium hydroxide from lithium chloride, in cooperation with Vulcan. To do so, Nobian will host and facilitate an electrolysis and crystallization demo-plant at its site in Frankfurt, close to the Vulcan geothermal-lithium reservoir sites for the extraction of lithium chloride. The demo-plant will be operated by Vulcan in collaboration with Nobian and is planned to be operational in Q3 2022. Vulcan and Nobian will also discuss chlorine and hydrogen offtakes, which are by-products of the electrolysis process, and jointly assess the feasibility for a commercial lithium plant.

Dr. Jürgen Baune, Vice-President Chlor-Alkali and Managing Director Nobian Germany said: "We are really excited about our cooperation with Vulcan. It will allow Nobian to become a key player in supplying raw materials to the battery industry and to further strengthen our battery raw materials portfolio. Which also includes caustic, hydrochloric acid, and hypochlorite, while we have strong market positions to commercialize the chlorine and hydrogen by-product.”

Vulcan’s Managing Director Dr. Francis Wedin commented: “This agreement with one of the largest chlor-alkali producers in Europe bolsters the operational experience and expertise in electrolysis production within the Zero Carbon Lithium™ Project team. Our partnership with Nobian is part of our strategy to capitalise on synergies created by working with existing chemical producers. Nobian’s experience will contribute to reaching our goal of starting production from our Zero Carbon Lithium™ Project in 2024.”

By signing the agreement, both companies are strengthening their position in the lithium market to supply the significantly growing battery and EV market in Europe. The agreement adds value by combining Nobian’s long-standing expertise in chloride electrolysis with Vulcan’s access to the largest lithium resource in Europe and knowledge of sustainable lithium production, located at the heart of Europe’s battery and EV industry. Roughly two-thirds of all lithium is used in batteries. Vulcan has secured offtake agreements with leading car manufacturers, including Stellantis, Volkswagen, Renault, and others.

Due to the strong demand for EV the EU is the fastest growing lithium market in the world, without local supply of lithium. The project supports the EU’s ambition to become less dependent on external sources for raw materials and technology, including the creation of European battery factories and local sourcing of Lithium.

Lithium transports the electrical energy in a battery and is an essential compound in rechargeable batteries. To be used in EV batteries, lithium chloride will be extracted from Vulcan’s geothermal brine using a Direct Lithium Extraction (DLE) process, after which it is converted to lithium hydroxide through electrolysis, using zero fossil fuels. For this purpose, Vulcan is aiming to build several geothermal plants, adjacent DLE plants and a central Lithium Hydroxide plant, based upon geothermal-lithium reservoirs in the Upper Rhine Valley area, close to Frankfurt.

The cooperation with Vulcan supports Nobian’s sustainability ambition to become carbon neutral by 2040, and to “Grow Greener Together” with partners (www.growgreenertogether.com). Vulcan’s lithium production is based on a net zero carbon production process. The cooperation also contributes to European and German climate goals to become climate neutral in 2050 by increasing electric and green mobility. 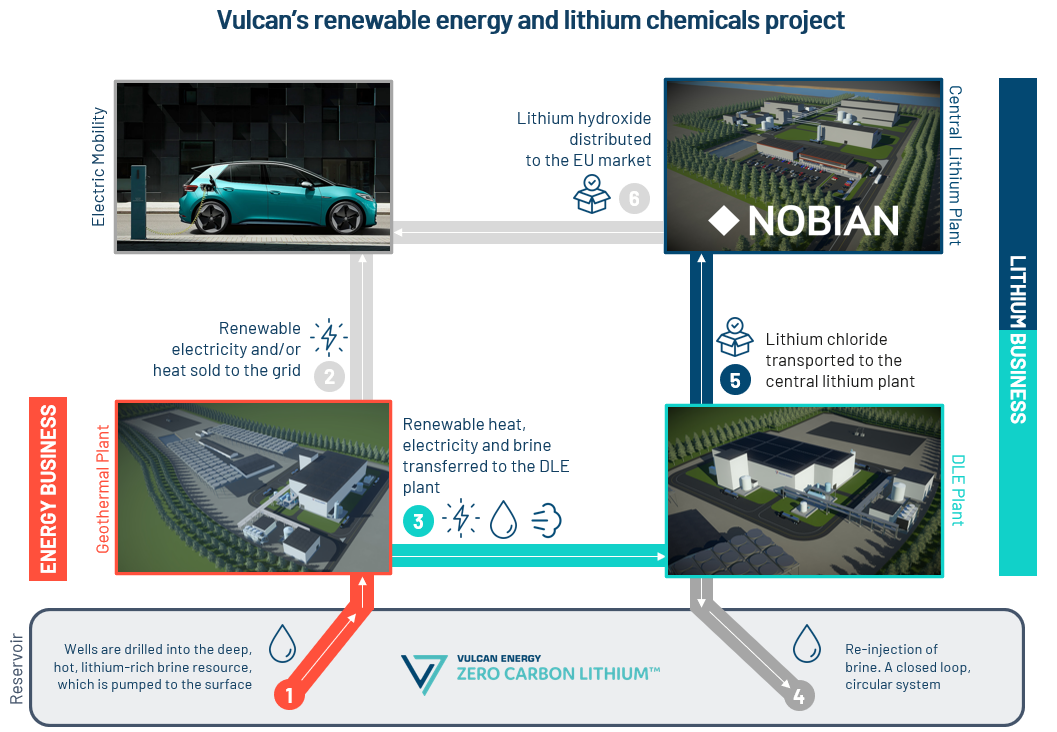