Chemistry you can count on

Today, Minister Adriaansens, of Economic Affairs & Climate, and Michael Koenig, CEO of Nobian, signed a declaration of intent as part of the tailor-made approach between the Dutch government and industrial companies in the Netherlands to accelerate the reduction of CO2 emissions. Together with the minister, State Secretary Vijlbrief, of Mining, and State Secretary Heijnen, of Infrastructure and Water Management, also signed the declaration of intent. The agreement is in line with Nobian's goal of being one of the most sustainable chemical companies in Europe.

Accelerating CO2 reduction and gas consumption
The signing took place during a working visit by Minister Adriaansens to Nobian's production site and the Chemical Park in Delfzijl. The declaration of intent includes projects with which Nobian intends to accelerate the current sustainability target of zero emissions in 2040 by another ten years, to 2030.
A key element is the electrification of Nobian's salt and steam production in Delfzijl and Hengelo. Efforts will also be made to accelerate the replacement of electrolysers in Rotterdam, reducing electricity consumption by 135 GWh per year, and further reducing emissions in the production of essential chemicals for industry. Together, the projects are expected to save around 550 kT of CO2 emissions, 350 mln m3 of natural gas and 430 tons of NOx emissions. This equals 2,5% of the Dutch governmental carbon reduction target and 1% of the Dutch gas consumption (280.000 households).

Tailor-made approach
Michael Koenig, CEO Nobian: "Nobian has been active in the Netherlands since 1918. In addition to a beautiful history, we also want a beautiful and sustainable future. Since 1990, our CO2 emissions have been reduced by 40%, with 35% green energy. Our current goal is zero emissions by 2040." Koenig continued, "The tailor-made approach have the potential to accelerate our ambition to zero emissions by 2030. It is a great opportunity to work with the government to address bottlenecks and permitting. With these projects we contribute to making industrial production more sustainable and strengthen the strategic independence of the Netherlands."

Minister of Economic Affairs and Climate, Micky Adriaansens: "Salt is used for so much more than what we know it for. Think for example of insulation materials, medicines, wind turbines and electric cars. This makes it even more important to produce it in a clean way. By signing the letter of intent, we have agreed to work on this together in the coming period. It is an important step towards the concrete tailor made agreement with Nobian. In this way we will ensure a substantial acceleration in the clean production of salt."

Accelerating Nobian's sustainability agenda
Accelerated reduction of CO2 and gas consumption.
Investing in electrification will both reduce emissions and save gas. This will be done by installing industrial heat pumps (mechanical vapor recompression installations) at Nobian's salt plants in Hengelo and Delfzijl. Furthermore, a greater intake of sustainable steam is being considered. Nobian also plans to replace three-quarters of the standing chlorine-electrolysis capacity at its Botlek chlorine plant in Rotterdam with state-of-the-art technology. This can further reduce power consumption, which also creates space on the grid for other parties to electrify. Another initiative is to examine how additional underground storage capacity for hydrogen in salt caverns can be developed, as part of the hydrogen backbone in the Netherlands.

Important step towards binding agreements
After the signing of the declaration of intent, the projects will be worked out in more detail. The provinces of Groningen, South Holland and Overijssel will be involved in this process. An important challenge in the projects is that existing installations would need to be written off more quickly and that major investments would need to be brought forward. The technical and business feasibility of the projects will be assessed, as well as the required financial structure, level of investments and the necessary government support to ensure the economic viability. The plans will be evaluated by an independent committee. The aim is to reach binding agreements by the end of 2023. 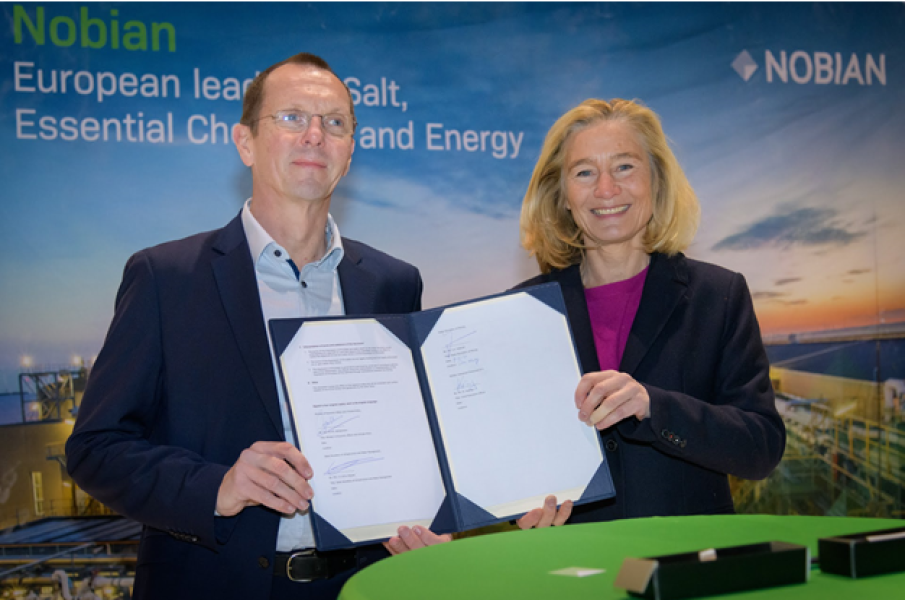